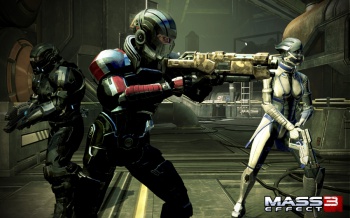 BioWare has coyly hinted that there may be a good reason to keep your saves around even after finishing Shepard’s story.

During a recent interview with GamerZines, Mass Effect 3 associate producer Mike Gamble vaguely teased that that the decisions players make in Mass Effect 3 might have repercussions beyond the game itself. Whether he’s referring to a forth installment or some run of the mill DLC is anyone’s guess.

“It wouldn’t be a bad idea [to keep your saves],” he said, presumably while wielding a smug, impish grin. “Obviously I can’t say anything, but it wouldn’t be a bad idea …” Gamble then likely followed the ambiguous suggestion by twirling the tips of his thin, black 1920s villain mustache and chuckling menacingly under his breath.

While Gamble’s words were purposely vague, let’s look at the facts.
What we do know is that BioWare won’t be ending Mass Effect with the series’ third installment, just the story of Commander Shepard. The team has made that idea abundantly clear. So what could this coy little remark be referring to? DLC? Doubtful. There’s really no reason to keep the fact that the game will eventually have additional content under wraps. After all, the other two had multiple installments each.

Perhaps another clue lies in other words spoken by Mr. Gamble earlier this week during an interview with Eurogamer. “[The ending of Mass Effect 3] going to make some people extremely happy; it’s going to make some people angry,” he said. “But that’s part of it, right? To invoke the emotion putting some of these stories to bed will naturally bring up.” So if BioWare is only putting some of these stories to bed, does that imply that we might see the series continue from a different hero’s perspective in a sequel/spin-off? We’re far into conjecture land here, folks, but that’s half the fun, isn’t it?

RPGs Just Got Nerdier With This eDice-Rolling Bracer