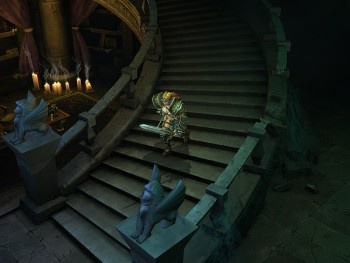 In a bit of a surprising announcement, Blizzard Entertainment has said that despite the anticipated changes to the show it will not be attending E3 this year.

After experimenting with toned-down, press only events in 2007 and 2008, with near-disastrous results, E3 organizer Entertainment Software Association has billed the 2009 show as a return to the spectacle of years past. Activision recently announced that it would be returning to E3 after dropping out in 2008, but Blizzard, despite being owned by Activision, won’t be following suit.

“Blizzard Entertainment will not be attending or participating in E3 2009,” Blizzard PR manager Bob Colayco said in an e-mail to Edge.

With the promise of an improved show and both Diablo 3 and Starcraft 2 in the works, the timing of Blizzard’s decision seems a bit odd. But as entertaining as E3 is for outside observers, many developers find it a distraction and a hassle, as they’re forced to invest time and energy into preparing for the show rather than actually working on a game.

In recent years, Blizzard has also shown a preference for using its Blizzard Worldwide Invitational conventions to promote its latest and greatest projects; Starcraft 2 was announced at the 2007 event in Seoul, South Korea, while Diablo 3 was unveiled in 2008 during the show in Paris, France. Closer to home, Blizzard also holds yearly Blizzcon events, featuring tournaments, Q&A sessions, previews of new games and more. Unlike E3, these events are open to the public.

Starcraft 2 is set for release in 2009, while no date has been set for Diablo 3. For more information, don’t bother going to E3.