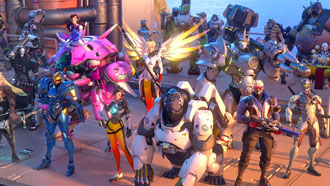 Overwatch‘s competitive mode was first shown off late in the beta, but it was not included when the game launched. Instead, Blizzard delayed it to late June. As that time draws near, the developer is releasing a bit more information about what we can expect when the ranked play mode goes live. The information below is from a video featuring Overwatch game director Jeff Kaplan.

First up, the length of the seasons has changed from about a month to about three months. The seasons will be based on the seasons of the year, with the first one at launch being Summer.

Next, the company plans to tweak the Assault format to cut down on the number of matches going into Overtime. It happens anywhere from 35 to 50 percent of the time, which Blizzard felt was a bit too high.

The game’s progression system has also been tweaked, and the competitive tiers have been removed. In their place is a new system that will feature a matchmaking ranking that is based on a player skill rating from one to 100. Player skill ratings and averages will be shown before and after matches, and you will also be able to see if you are playing against a pre-made group. Blizzard says that this may result in skill ratings occasionally dropping, but the company plans to monitor this system to make sure it is working as intended.

Lastly, Kaplan talked about the rewards that players can expect from competitive play. While there are no plans for rewards that will increase player power, there will a number of cosmetic rewards available. These will include new sprays and player icons that will only be obtainable during each season. There will also be a customized “Golden Gun” system, and the example offered was Reinhardt’s Golden Hammer. Kaplan said that more skilled players would be able to unlock these items “way sooner than anyone else.” There will also be exclusive cosmetic rewards that are only available to highly ranked players.

In addition to competitive mode, new heroes and maps are on the way as well. Kaplan said that Blizzard is “hoping to deliver [Competitive Mode] at the end of June,” despite a rumor earlier this month that the mode had been pushed to July. You can check out the full video with Kaplan below.

You Can Play as a Girl in The Fractured But Whole

Warcraft Has Made More Money than Any Other Video Game Movie