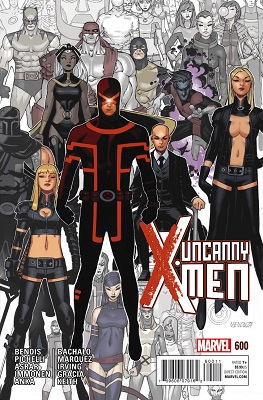 Marvel has released a cluster of preview pages from the upcoming Uncanny X-Men issue 600.

Over the past several years, writer Brian Michael Bendi has spent no small amount of his time working to reshape the face of the X-Men in the Marvel Universe. That being the case, Bendis’s time with the X-Men will soon be coming to a close with the release of Uncanny X-Men issue 600. The new comic will be a whopping 38 pages long and feature artwork from a long list of artists including Stuart Immonen, Chris Bachalo, David Marquez, Sara Pichell and more. Hoping to put the spotlight on its art, Marvel has released a collection of preview pages from the book aimed at giving readers a sneak peak at its varying styles.

Speaking about the book itself in an interview earlier this year, Bendis shared that his goal with the X-Men has simply been to do something that hadn’t been done before. “The shadow of Claremont is gigantic,” he said, referring to longtime X-Men writer Chris Claremont. “With Claremont’s X-Men I was like, what you really need to do is come up with something he hasn’t done and good lord in 30 plus years, what didn’t he do? Anything you could think of, he did with the X-Men.”

This drive to do something original, in turn, became the primary motivation behind Bendis’s All-New X-Men which followed the adventures of the original four X-Men after being pulled from their era and transplanted into the present day. Scott Summers transformation into a militant mutant revolutionary also stemmed from this desire to shake things up. “[We had] two really good hooks for the X-Men that are not reminiscent of something Claremont had done but at the same time still absolutely felt like an X-Men situation.” With issue 600 Bendis hopes to resolve some of the issues and questions his varying X-series have raised over the past few years. “We’re going to close some doors and open some doors and we’re going to bring it full circle.”

Uncanny X-Men 600 had originally been intended to release earlier this year but was delayed to give it some breathing room away from Marvel’s still ongoing Secret Wars mega-event. Fans eager to get their hands on the book will be able to buy it in November. In the meantime, check out the aforementioned preview pages and some extra variant covers unveiled earlier this month.

8 Gaming Franchises that Should Make a Comeback