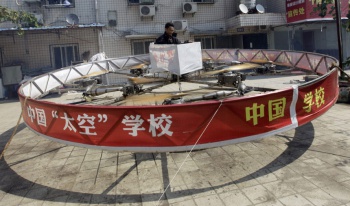 Chinese farmer Shu Mansheng is a man with a dream. A dream to build the most insane, terrifying flying machine in human history.

See that image at right? That’s Mansheng sitting in the “cockpit” of his creation as it hovers a few feet above the ground. Surrounding him are eight motorcycle engines attached to propellers whose spin provides lift and a quick, violent death if he ever steps outside of that tiny box.

The round steel flying device, which cost more than 20,000 yuan ($3,135), is the fifth model made by Shu, a junior middle school graduate. It measures around 5.5 meters (18 feet) in diameter, and is powered by eight motorcycle engines. Shu managed to hover for 10 seconds at about 1 metre (3.3 feet) above ground during a recent test flight.

Being a farmer in the relatively rural Wuhan, Hubei province, Mansheng cobbled this thing together from a collection of parts stripped out of other, far less dangerous machines. Those engines would normally be found inside motorcycles and the body of his device seems constructed from the same material local businesses use to build their outdoor signage.

Though the machine seems to work, and did achieve lift-off (while tethered to the ground, lest it go flying off into the atmosphere), this thing seems to have been created as a pure expression of the maker spirit. Mansheng really had no need for a hovering blade collective, but there was still a lingering question of whether or not it could be done. So he built one.

Normally this is where I’d applaud the man’s creative drive, but at the same time I’m trying not to laugh at how horrifically dangerous this machine would be both to its pilot and anyone nearby. It’s like a callback to Soviet-era engineering when devices were constructed to function at all costs, even if that meant decapitating a few dozen hapless volunteers.

Also, did you notice the sentence that mentions Mansheng’s education? This guy is a “junior middle school graduate” — and that’s Chinese middle school, so it’s probably safe to bet he wasn’t attending advanced lectures on aerodynamic theory. I can only imagine what Mansheng might have built if he had a college degree.

I’m pretty sure it would have lasers.

Real Deus Ex-Style Augmentation Could Depend on Squid Ink