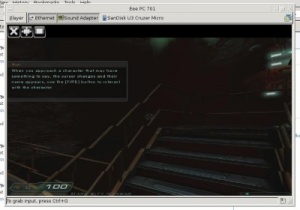 StreamMyGame, a service that lets users access their games and applications over in-home broadband networks, has released a new version of its software that lets gamers play Crysis, BioShock and other high-end games on Eee PCs.

Despite not being built as gaming machines, StreamMyGame says its new software allows games to run on Windows and Linux version of the Eee PC, as well as other “Netbooks” and UMPCs. The system makes use of a standard PC to drive the game, while the Eee PC accesses it via built-in wireless adapter. According to the company, even graphically-intensive games like Crysis, Call of Duty 4, BioShock and Half-Life 2 will run “responsively,” and new Eee models using higher-speed 802.11n and WiMAX technology will provide even better gameplay as a result of reduced network lag.

“The Linux player has been requested by our Eee PC members and has been optimized to run on both the original and new ranges of the Eee PC. The Windows player has also been optimized,” said StreamMyGame CEO Richard Faria. “You can have your games installed on your home PC and play them on your Netbook around the home and remotely, providing a portable gaming experience on screens that have resolutions of 1024×600. There are over 100 Netbooks and UMPCs that are now compatible with our technology and we will guarantee similar compatibility with the MID market.”

Designed by Asus, the Eee PC is a lightweight “subnotebook” system built around a small LCD screen, flash storage instead of conventional hard drives and other features designed to reduce size, weight and expense. Many Eee models make use of the Linux operating system, although some newer versions have Windows XP installed, and wireless LAN adapters are built into every model.

Along with Eee PCs, StreamMyGame lets gamers access new games even on old PCs or laptops, as well as on PlayStation 3 consoles with Linux installed. A video featuring a Windows-based PC-701 Eee model playing Crysis and Quake 4 is available via YouTube. For more information, check out StreamMyGame.com.