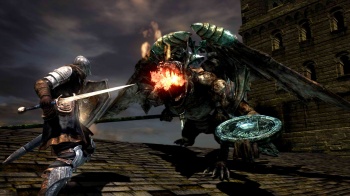 Namco Bandai just released the 1.05 patch for both the Xbox 360 and PlayStation 3 versions of Dark Souls and we’ve got details.

Dark Souls isn’t technically an MMO, and yet it flirts with the genre like a drunk co-ed rebelling against daddy. Thus, when the game gets a patch full of balance tweaks and subtle changes to the brutal adventure, fans of the game should prick up their ears and have a peak.

The good news? This particular patch seems to make the game a bit easier. Don’t get me wrong, it’s still capable of turning even the most devout Buddhist monk into a swearing, screaming infant, but with the 1.05 patch Dark Souls has gone from “insanely hard” to merely “really stupid-hard.”

I’ll include the full translated patch notes below (hat tip to Brett for the translation), but would like to draw special attention to one particular change that means a whole lot to me:

On behalf of everyone who has spent the vast, vast majority of their time in Dark Souls as a sunken-eyed Hollow, I’d just like to say “Gwyn be praised!”

That said, here’s the rest of the changes courtesy Brett’s Pastebin post:

Equipment General Changes:
Reported some weapon scaling gets improved at higher normal upgrades (+15 uchi dex scaling goes to A)
Some scaling reported as changing from A to S with higher upgrades

Fixes:
Fixed some freeze issues
Lvl up screen displays souls needed properly now
Dragon-head glitch, snuggly, and magic shield glitches fixed.
Fixed a bug where your inputs come out 1 second later.
Fixed a bug where the second solaire event wont progress.
Fixed a bug where feeding frampt a titanite stone then going over 99 resulted in having zero.
Fixed some specific map areas where you’d get stuck or be unable to progress.
Changed some english subtitles on the overseas port.

So? What do you guys think? Awesome or super awesome?