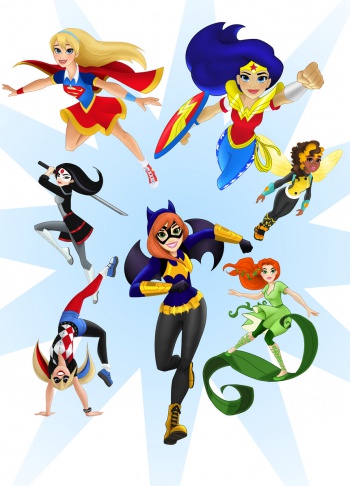 If you’ve followed superhero comics and toys for the past few forevers, you’ve likely noticed a weird trend – they’re almost entirely geared towards young boys. Even though girls enjoy these stories and action figures as much as boys, it’s staggeringly rare to see them marketed as such – although that might finally be changing. For proof, look no further than “DC Super Hero Girls” – a standalone DC Universe built entirely around female superheroes and villains.

“DC Entertainment is home to the most iconic and well-known Super Heroes including Wonder Woman, Supergirl and Batgirl,” said Diane Nelson, President of DC Entertainment. “DC Super Hero Girls represents the embodiment of our long-term strategy to harness the power of our diverse female characters. I am so pleased that we are able to offer relatable and strong role models in a unique way, just for girls.”

Aimed at girls aged 6-12, DC Super Hero Girls explores the formative years of Wonder Woman, Supergirl, Batgirl, Harley Quinn, Bumble Bee, Poison Ivy, and Katana – among others. Each character will have their own storyline which will unfold across TV specials, films, books, and original digital content.

And almost in response to anti-girl criticisms of recent years, DC Super Hero Girls places a strong emphasis on toys. DC Comics has partnered with Mattel to launch a 2016 toy line, complete with action figures that emphasize strength and heroism. The LEGO group will contribute building sets “designed to inspire girls’ imaginations”, while other partners will contribute across various merchandise lines.

“Partnering with the best and being the best partner is of paramount importance,” Richard Dickson, President and COO of Mattel, explained. “Together with Warner Bros. and DC Entertainment, the DC Super Hero Girls franchise will further expand our already powerful girls portfolio. We know Super Hero is a culturally relevant theme and the DC Super Hero Girls franchise will engage and inspire girls, providing cues to explore heroic acts through play and into real life.”

While this line isn’t aimed at me in particular, I still have to admit – it looks really cool. I suspect there are many female superhero fans out there – or comic book readers with young daughters – who are really excited to see what DC Super Hero Girls offers. We’ll find out when DC kicks off a digital publishing line in Fall 2015, followed by graphic novels and toys the following year.