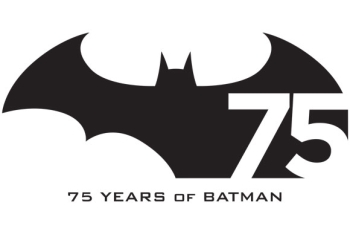 The Caped Crusader will be celebrated all year with a sweepstakes, commemorative merchandise and comics, new animated shorts and other releases.

Warner Bros. Entertainment and DC Entertainment kicked off the year-long celebrations for Batman’s 75th anniversary today, revealing a commemorative logo. The Caped Crusader will get anniversary activities throughout the year, including a sweepstakes, commemorative comics and products, and a “Cape/Cowl/Create” art exhibit. The sweepstakes will award one winner a Batman 75th anniversary prize package, and is open to US residents. The art exhibit will feature interpretations of Batman’s iconic cowl and cape from 20 artists, inspired by the upcoming video game Batman: Arkham Knight. Today, the DC Comics’s website also launched a dedicated page for the anniversary celebrations.

DC has planned a packed year for Batman. New Batman titles, commemorative issues, and exclusive variant covers will be released in 2014. The new weekly comic series Batman Eternal launches April 9. Anniversary celebrations will be held at comic retailers, libraries, and other stories on July 23. Two new animated shorts will debut in April, and older titles are set to be released by Warner Bros. Home Entertainment. A 25th anniversary edition of Tim Burton’s Batman is scheduled for fall, and the Batman ’66 television series will be released for the first time. The upcoming live-action television series from Fox, Gotham, is also being promoted as part of the celebration. Fans can also expect a number of special edition and limited-release toys, t-shirts, and other products to mark the anniversary.

Batman first appeared on newsstands March 30, 1939 in Detective Comics #27. The issue featured artwork by Bob Kane and a script by Bill Finger. In that issue, he was known as The Bat-Man. A year later, the character got his own title and took on The Joker and Catwoman in Batman #1. “Batman is one of the greatest characters ever created, in comics or elsewhere, and even after 75 years he continues to wildly fascinate fans. He is an integral part of pop culture and has successfully captured the imagination of the entire world,” says Diane Nelson, President of DC Entertainment and President & Chief Content Officer, Warner Bros. Interactive Entertainment. “The origin of Batman, Bruce Wayne and the famous citizens of Gotham are legendary and likely a story you know inside out, even if you’ve never picked up a comic book in your life, and that speaks volumes to the character’s immense popularity and the constructs of the original mythology.”