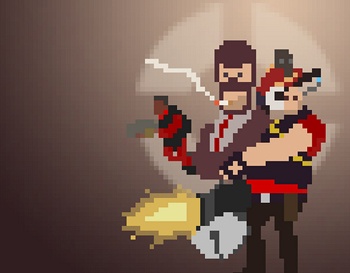 Last month a group of rogue developers pulled out all the stops to offer some imaginative retro takes on current gaming hits – now it’s time to vote for your favorite.

With the recent Bootleg Demakes Competition now drawn to a close, voting is still ongoing on the massive collection of independently developed entries. Organized by independent gaming site TIGSource, the month-long competition held in August challenged developers from its forum community to concoct their own interpretations of modern games remade through the creative lens of old school gaming systems.

Competitors were tasked with creating their bootlegs by using only 100 percent original content; no ripping of sprites or use of trademarked names was allowed. Additionally, the objective was to modify the game’s mechanics in an interesting way that highlights unique aspects of the title. A total of 68 completed entries were submitted, resulting in a uniquely hilarious and inventive collection of gaming hits from the recent past, present, and future re-imagined in quasi-retro form.