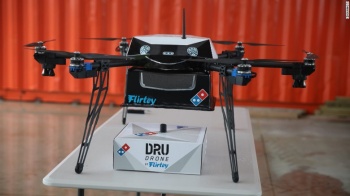 Could this be the end for the humble pizza delivery boy?

Drones are being used for more and more these days, and with online shopping website Amazon testing the waters for drone-delivery of packages, it was only a matter of time before drone-delivered pizza became a thing. In New Zealand, that dream has become a reality, with Domino’s pizza aiming to make its deliveries by air.

“It doesn’t add up to deliver a two kilogram package in a two-ton vehicle,” said Scott Bush, a general manager for Domino’s Pizza Enterprises New Zealand. “In Auckland, we have such massive traffic congestion it just makes sense to take to the airways.”

Bush said test deliveries to actual customers will begin September 26 out of one Auckland store, and if successful may end up rolling across the entire nation. New Zealand’s drone rules don’t currently allow a drone to fly farther than the drone’s operator can see, so a human operator will still be needed to operate the drone. If you’re currently a pizza delivery boy, you may want to brush up on your drone operating skills…

“We want to push it as hard as we can and roll it out globally throughout our seven markets,” Bush said. The markets Bush is referring to are Australia, Japan, The Netherlands, France, Belgium and Germany, as Domino’s in these countries are operated by a completely separate entity to the US chain. In other words, don’t hold your breath for drone-delivered pizza in the US quite yet!

Mechanic – Resurrection – Who Asked For This?