The storyline will be cross-platform on the Neverwinter and Sword Coast Legends video games alongside books and the tabletop RPG.

Dungeons & Dragons has announced their new storyline for late 2015. Titled “Rage of Demons,” it pits players of the various D&D titles against various iconic Demon Lords, who have been causing chaos deep in the Forgotten Realms’ underdark. Players will be trying to stop the demon lords before they reach the surface and spread chaos in the world above. Heroes will team up with well-known R.A. Salvatore character Drizzt Do’Urden, and the upcoming Drizzt novel Archmage will serve as a prelude of sorts to the storyline. According to Wizards, Salvatore was involved in framing the storyline as a whole. There will also be an expansion for the Neverwinter MMO, tentatively titled Underdark, and the campaign for upcoming four-versus-one RPG Sword Coast Legends will focus on the Rage of Demons story. The story for the tabletop game will come in an adventure called Out of the Abyss, which will take players from levels 1 to 15. 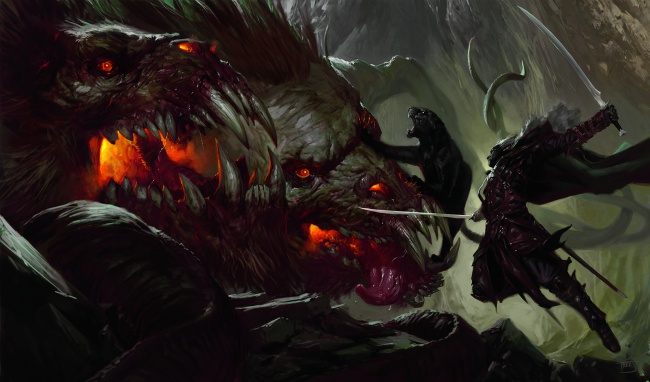 After Tyranny of Dragons and Elemental Evil, Rage of Demons will be the third large event D&D has launched in the new transmedia storyline-driven approach it’s using alongside the 5th Edition ruleset. Wizards declined to share details about precisely what new races or classes would be in the Out of the Abyss adventure, but it’s safe to say we’ll get some new material given the positive reaction to the free players companion for Princes of the Apocalypse. Beyond sharing that the book would exist and release in 2015, Wizards declined to comment on any contents it would have. Though we asked if Drizzt would have official statistics inside. As far as Demon Lords, Wizards confirmed we’d see…

Which is pretty much a curtain call of D&D‘s famous Demon Princes, minus Pazuzu, Malcanthet, and Dagon. Though I’m sure they just forgot to mention them. When I asked the D&D team what fellow Abyss-dweller Lolth, Demon Queen of Spiders and de-facto boss of the Underdark (due to all her Dark Elf followers), thought of the Demon Lords stepping onto her turf, they gave a cryptic “Lolth certainly plays an important role in Rage of Demons, but it’s up to the players to discover exactly what that role is.”

On the computer RPG side of things, the Neverwinter RPG’s expansion will have players fighting alongside Drizzt in the drow city of Menzoberranzan during a demonic assault on the underground metropolis, doing quests written by R.A. Salvatore himself. The expansion will first release on PC, then on Xbox One.

Anyone recognize that rune?