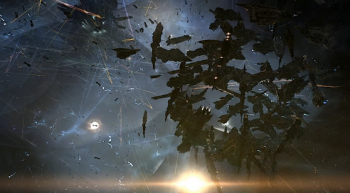 The TEST Alliance gets its digital butt well and truly whipped.

Two of the largest alliances in EVE Online, TEST Alliance and the CFC, met in glorious combat over the weekend, in a culmination of months of agitation and brushfire conflicts. More than four thousand pilots bludgeoned it out in the cold vastness of space and, when the dust dispersed, 2,900 ships had been vaporized. It took five hours for CFC to comprehensively defeat TEST, and one of EVE Online‘s developers confirms that this latest fleet fight is, by far, the largest ever in-game.

“A day will come again when the courage of TEST fails, when we forsake our allies and break all nips and agreements,” the CEO of Dreddit, a TEST Alliance corporation member, boldly proclaimed. “But it is not this day.” Unfortunately for him, it was. By the end of the third hour, TEST was in full retreat, and a tentative decision to send in reinforcements was rejected, presumably to avoid turning a defeat into annihilation. “We figuratively decapitated their leaders,” says the Mittani. “Damnation command ships and heavy interdiction cruisers (hictors) were the focus of our attack, and there is no force in EVE that can withstand the guns of a thousand Megathrons.” Without leadership, the TEST fleets were at CFC’s mercy, and by the end of the battle the remaining TEST forces were being summarily wiped out by CFC’s fleets. One TEST suicide run involving more than two hundred TEST ships did manage to take out a CFC dreadnaught, a last act of bravery, but by that point the battle was all over bar the shouting.

A full accounting – including cost – has yet to be carried out. The Battle of Asakai, a previous record-holder, cost the losing team about $20,000, so it’s likely TEST lost at least that much, if not more. “It was long, it was grueling, and it was large,” says the Mittani. Expensive too, and probably a lot of fun, unless you happen to be a TEST pilot.