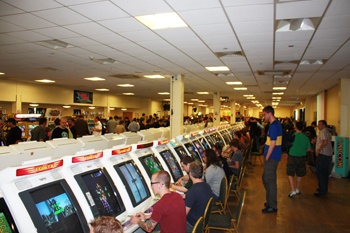 This past weekend, hundreds of coin-op fans descended on the leafy English town of Northampton to gorge themselves on over 200 arcade titles, from bullet hell shmup classics to bleeding-edge beat-em-ups, at the inaugural Insert Coin gaming expo. Could this sort of celebratory, public event help reenergize the ailing UK arcade scene?

Entirely independent and with no corporate sponsorship, Insert Coin 09 genuinely felt like a grassroots effort. The emphasis was firmly on the fans, who thronged good-naturedly around the dozens of Egret 2 cabinets. (The serious tournament players chugged energy drinks; the casual hobbyists seemed to favor frothy beer.)

A cosplay event co-ordinated by UK gaming forum Ready Up meant there were some familiar faces in the crowd – including some creepy Silent Hill nurses, Inphyy from Ninety-Nine Nights and a convincing Solid Snake who kept sneaking outside for a cigarette.

It’s continuously reported that the arcade gaming sector is in terminal decline worldwide, but the mood over the two days of Insert Coin was celebratory and refreshingly sociable. A tall, friendly Dutchman cheerfully hammered me at Street Fighter III: Third Strike. The DJs honored my request to hear some rousing themes from Soulcalibur. And I watched a Stormtrooper in full armor struggle to negotiate a Japanese dog-walking simulator.

Co-organizer Alan O’Grady suggested that Insert Coin had identified a gap in the UK gaming market. “At 8:30 am on the first day, there was already a line ’round the venue,” he said. “I think that shows there’s an appetite for this kind of event. Everyone’s been really supportive and seems to have had a great time. We want to do the same again next year, but four times bigger. We’re already looking around for possible venues.”

You heard it here first: Insert Coin to continue.

Did any of you get a chance to attend?