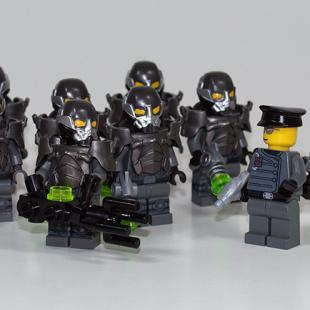 You know what’s a great game? Fallout 3. And you what’s a great way to celebrate a great game? LEGO, of course. Granted, LEGO has a seemingly uncanny to make everything better, but we’re going to go on a limb and say that video games especially see perfectly tuned to reap the benefits of LEGO recreation. Halo, FTL, Bioshock: Infinite; they’ve all been at the root of some excellent builds in the past and now, thanks to LEGO fan Justin Stebbins, Fallout 3 can count itself among their ranks.

Stebbins, posting to his personal website, recently released a series of pictures rebuilding the game’s Enclave faction. Featured in his build was a nifty LEGO brick take on the Enclave Vertibird as well as an army of custom made mini-figures pieced together with paint, decals and whatever LEGO parts he could find that resembled Enclave power armor. He also created an Enclave officer, a pilot and a pair of Enclave scientists using similar methods.

This isn’t Stebbins first foray into game-based LEGO builds either. His previous work (which can actually be purchased at his website) includes a practical butt-ton of custom mini-figures based on games like Tomb Raider, Uncharted, Skyrim, Watch Dogs, Metal Gear Solid and more. Put shortly, if you’re even a casual fan of either video games or LEGO you really owe it to yourself to take a peek at his wares.

Bring Back the Box: What We Have Lost With Digital Distribution