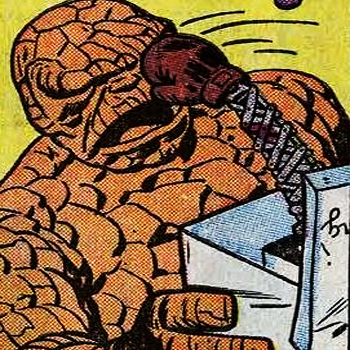 Fox’s next superhero reboot throws out the book. Literally.

It’s been known for awhile now that Chronicle director Josh Trank’s Fantastic Four reboot movie was going to be taking the Marvel heroes in a new direction: Younger versions of the characters, a new origin story, possibly no costumes (though, to be fair, it took them a few issues of the original comics to stop wearing just regular street clothes) and won’t even be called The Fantastic Four in the actual film.

Now, according to an interview in Esquire Latin America, Kate Mara (who portrays Invisible Woman aka Sue Storm in the film) is suggesting that essentially nothing from the comics has survived into this adaptation. Said the actress: “I’ve never been a fan of comics, I’ve never actually read one. I was going to for this movie but the director said it wasn’t necessary. Well, actually he told us that we shouldn’t do it because the plot won’t be based on any history of anything already published.”

While it’s not unheard of for movie adaptations to diverge in all but name from source material, this is the first anyone has heard of such (supposedly) complete disconnection for this particular project. It had been reported at one point (but not confirmed) elsewhere that the film would be drawing primary inspiration from Ultimate Fantastic Four as opposed to the mainstream Marvel Universe.

Fantastic Four (or whatever they end up calling it) has been described by producer Simon Kinberg as “a much more grounded, gritty, realistic movie than the last couple,” is currently targeting a June 19, 2015 release date. Along with Mara, the film stars Miles Teller as Mr. Fantastic, Michael B. Jordan as The Human Torch, Jamie Bell as The Thing.