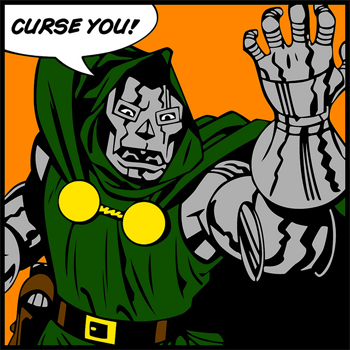 Even though fans have yet to see a trailer, plot-description or even cast/set photos, we’ve know for a long time now that Chronicle director Josh Trank’s Fantastic Four reboot movie is going to be a big departure from its source material. But the actor playing Doctor Doom may have now revealed just how different things might be.

In a video interview with Collider, actor Toby Kebbell (who also portrays Koba in the new Planet of The Apes films) offered up that the character now has a Russian surname …and a surprising occupation:

“He’s Victor Domashev, not Victor Von Doom in our story. And I’m sure I’ll be sent to jail for telling you that. The Doom in ours – I’m a programmer. Very anti-social programmer. And on blogging sites I’m ‘Doom.'”

One of Marvel Comics’ most iconic supervillains, Doctor Doom has traditionally begun as Victor Von Doom, a scientist and magic-practitioner of Romani descent who rules over the fictional nation of Latveria and blames Reed “Mr. Fantastic” Richards for his (supposed) disfigurement in an accident when they were college students. He was portrayed previously by Julian McMahon in an earlier adaptation of the series, which also took significant liberties with the character’s origin and background.

Putting The Boot In