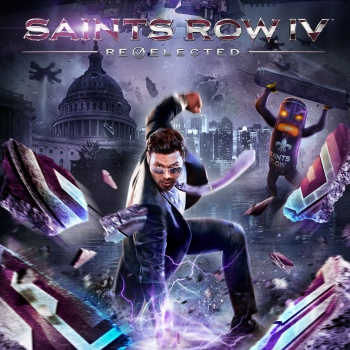 Could you even call the Xbox One or the PS4 a “next generation” of consoles without having a Saints Row title playable on them?

Publisher Deep Silver plans to rectify the dearth of wacky, irreverent open-world games on new consoles by releasing Saints Row IV: Re-Elected. The original release was a wonderful departure from the roots of the series and told the story of the Saints Row boss, now the President of the United States, battling an alien invasion. You teamed up with your gang, and Vice President Keith David, in a virtual reality version of Steelport, gaining superpowers and weapons along the way. Re-Elected includes all of the DLC released for Saints Row IV – weapons, missions, vehicles, etc. – for only $29.99 when it comes out on January 27th.

The update also includes features to take advantage of next-gen doohickeys. There’s voice commands for calling in your homies and navigating menus. You can use all of the screenshot, game clip sharing and broadcasting tools of each console. Re-Elected on the PS4 supports Remote Play with your Vita. And of course, the resolution and graphics have been enhanced for the new capabilities of the consoles.

The standalone expansion Gat Out of Hell also comes out on that date for $19.99, and the total 50 buck package would be a great way to get Saints Row on your fancy new console. At least, that’s what Deep Silver is trying to accomplish here.

For more on Gat Out of Hell, and the progression of Saints Row from GTA clone to truly wacky story-telling, check out my interview with Creative Director Steve Jaros here.

1A Supernovas Can Re-ignite and Explode Dead Stars