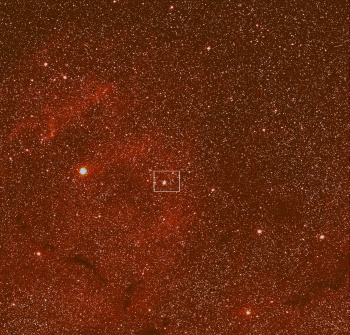 After waking up from a 10 year slumber, the Rosetta spacecraft has taken its first two images of its destination, comet Churyumov-Gerasimenko.

The European Space Agency’s Rosetta spacecraft is zeroing in on its objective: Comet Churyumov-Gerasimenko, which is still 5 million kilometers from it. After waking up from its deep-space hibernation on January 20, Rosetta has taken its first look at its destination.

On March 20 and 21, Rosetta took two “first light” images of the comet with OSIRIS, an onboard imaging system with a wide-angle and narrow-angle camera. Rosetta’s journey began 10 years ago, and it has since been hurtling through the Solar System at almost 1800 mph. In August, its long voyage will finally come to an end, and clearer images of the comet will be available as early as May.

“Finally seeing our target after a 10 year journey through space is an incredible feeling,” says OSIRIS Principal Investigator Holger Sierks from the Max Planck Institute for Solar System Research in Germany. “These first images taken from such a huge distance show us that OSIRIS is ready for the upcoming adventure.”

“This is a great start to our instrument commissioning period and we are looking forward to having all 11 instruments plus lander Philae back online and ready for arriving at the comet in just a few month’s time,” says Matt Taylor, ESA’s Rosetta project scientist.

OSIRIS is just one of 11 science instruments aboard the Rosetta orbiter. Together, this suite of systems will detail the comet’s surface geology, gravity, mass, shape, internal structure, plasma environment, and gaseous, dust-laden atmosphere.

Retailer Claims Watch Dogs Will Use Steam on PC