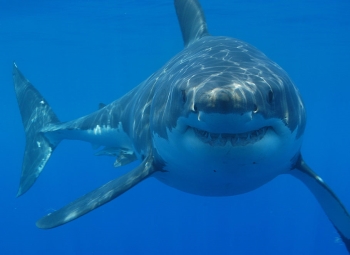 Paleontologists discovered a 325-million-year-old shark-like fossil that may disprove the idea that sharks are living fossils.

Sharks are apex predators, built for speed, aquatic hunting, and terrifying Discovery specials. Paleontologists have long considered sharks “living fossils”, believing that natural selection led to their optimal body shape and anatomy several hundred million years ago, and that evolutionary forces have not changed them significantly since then. However, a study published April 16 in the journal Nature is now challenging that assumption. A team of researchers led by the American Museum of Natural History in New York City discovered a 325-million-year-old fossil shark. The fossil is of a newly discovered species, Ozarcus mapesae, whose gill arches are more similar to modern-day bony fishes and ancient, extinct fishes than modern day sharks. The gill arches are structures of bone or cartilage that support the sharks’ gills. The differences observed in the gill arches suggest that “modern sharks are in this respect evolutionarily quite advanced,” says vertebrate paleontologist and study co-author John G. Maisey.

Researchers discovered the well-preserved fossil in the Ozark Mountains of Arkansas. Few gill arches from ancient sharks have been studied, partly due to few well-preserved specimens but also due to technological limitations. The fossil was uniquely useful because it preserved the three-dimensional arrangement of the bones. The researchers were able to scan the fossil and create a high-resolution computer model, allowing the gill arches to be compared to ancient and modern fish. “The basic arrangement we found in Ozarcus would characterize the common ancestor of all these forms,” says Maisey. The gill arches in modern sharks have a different arrangement than O. mapasae, suggesting that modern sharks continued to evolve.

The study concludes that bony fish, and not modern sharks, should be studied to better understand the evolution of gill arches and jaws. “This is the real condition in an early shark, and it changes how we have to think about the evolution of jawed vertebrates,” says Maisey. Well-preserved gill arches from ancient sharks are rare, so the researchers were not able to complete a comprehensive analysis and further study is needed. However, the use of computer models for the analysis of these fossils has provided researchers with more tools to perform studies, like this one, that could not have been conducted before.

8 Examples of Why Video Game Graffiti is the Best