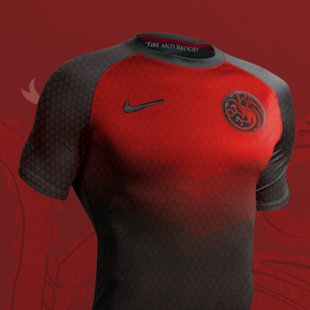 Artist Nerea Palacios reimagines the houses of Game of Thrones as soccer teams.

In Westeros’ game of soccer, you win or you die. Artist Nerea Palacios’ latest project was inspired by both the ongoing World Cup and the Game of Thrones series. Blending the two together, Palacios created soccer uniforms for the different houses in the series.

Using Nike kits and Game of Thrones logos, Palacios used the colors of the houses – and the Night’s Watch – for the different team uniforms, but it’s not much of a surprise how much red there is. From the Starks to the Targaryens, a world cup held in the Game of Thrones universe would have to be full of violence, celebration, disappointment, and biting – much of which already exists in this year’s World Cup.

Each uniform has an interesting design, but the Night’s Watch design sports some cool detailing on the top, and the Boltons certainly stand out. The design on the front of the Targaryen jersey looks like scales, and the waves on the Tully jersey remind me of the house’s sigil. It’s hard to pick favorites out of these, and Palacios did a great job using the house sigils for inspiration.

A few of the houses are left out for now. Palacios noted on June 23 that she will be adding more soon.