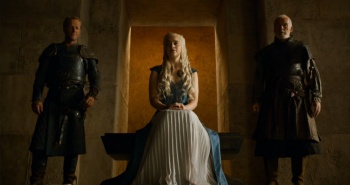 Viewer numbers are likely to increase as season 4 draws to a close.

Game of Thrones is officially HBO’s biggest series ever, with 18.4 million viewers per episode. Sopranos, the previous top dog, only ever managed 18.2 million viewers, and Game of Thrones‘ viewer count is likely to increase as the season draws to a close. After all, there’s still The Watchers on the Wall and The Children to go.

The series has gained 4 million viewers since season 3 – *cough* Red Wedding *cough* – and is a long way forward from the halcyon days of season 1, when it averaged only 9.3 million viewers per episode. Season 5 and its alleged multitude of Martells has a lot to live up to. Then, of course, there’s season 6 …

Naturally this popularity extends to the wonderful world of torrents, where Game of Thrones has been shattering one or two records. In times past, its most popular episode might have been shared 3.4 million times during the entire year; now it reaches that number in a single day. Not that long ago Game of Thrones enjoyed the questionable glory of being, not just the most pirated show, but also the first one in history to have 200,000 people sharing the same file online on the same day, according to TorrentFreak.

Sharknado 2: The Second One Trailer

World’s Largest Game Collection For Sale: 11,000+ Titles Could Be Yours