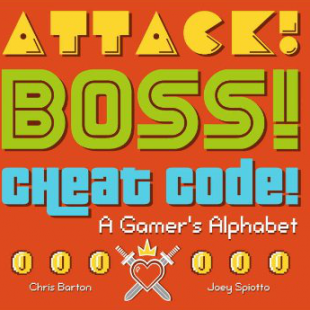 Some of the most difficult waters to navigate as a gaming parent is the idea of introducing video games to your own children. There’s a wealth of opinions on the subject with some saying kids shouldn’t play games at all while others would argue that gaming can be a beneficial force in children’s lives when managed properly. For some however, the question isn’t whether or not to introduce children to video games, but rather how you should go about it.

Hoping to give parents, children and curious would-be gamers alike a new tool to learn about gaming and its wider culture, author Chris Barton wrote Attack! Boss! Cheat Code!: A Gamer’s Alphabet. Due to release later this month, it combines common gaming terms and lingo with colorful illustrations by artist Joey Spiotto to create an introductory book that people of all stripes can learn from and enjoy.

“When you’re a kid who’s passionate about something, or who’s just now getting into something new, there are two things you want to do. You want to find out more about it, and you want to bring the people you care about up to speed so that they can appreciate your enthusiasm, and even share in it,” said Barton, speaking to The Escapist. “I wrote Attack! Boss! Cheat Code! in hopes that it will help out on both counts.”

It’s Barton’s hope that A Gamer’s Alphabet will help both parents and children develop “an appreciation of just how rich and deep and wide the culture and history of gaming can be.” That in mind, he and Spiotto carefully selected gaming terms that they feel could help spark a deeper interest in the medium for the book’s readers. “There are a whole lot of other terms we could have used for most of those letters,” he said. “I’d love it if the information we give in this book whets readers’ appetite to find out more.

Attack! Boss! Cheat Code! will be releasing on October 21st and will retail for $14.95. It’s currently available for pre-order at major booksellers like Amazon and Barnes & Nobles.

Global Warming Underestimated by up to 50%