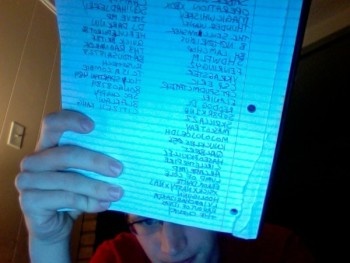 Gearbox Creative Director Mike Neumann probably wasn’t thinking too clearly when he made a Twitter promise to play online with anyone who preordered Borderlands and now he’s suffering for it.

It was a simple enough offer. In a Twitter post yesterday, Neumann wrote, “Today is official Borderlands Pre Order Day. Twitter me a screen of you buying the game and I’ll play BLs with you and give you loot.” He obviously didn’t think very many people would even notice; unfortunately, his plan for some Borderlands fun with a handful of Twitter followers got away from him a bit when Kotaku posted news of his promise.

“OMFG Kotaku did not just do that to me,” Neumann Twittered in response to the report on his promise. Users were “flooding in,” he said, exponentially increasing the magnitude of his task. Fortunately, he took it all with good humor, writing later, “Dear Diary, today I did a cool thing for some fans and hilarity ensued. I never left the house again and people made fun of my hair.”

Despite the numbers involved, Neumann has continued to take Xbox Live and PlayStation Network tags (he’s “still figuring out the PC situation”) and plans to stand behind his promise, although he did ask if some gamers would mind playing with Randy [I would assume that’s Gearbox co-founder and CEO Randy Pitchford] instead.

Neumann’s is the second high-profile and rather strange Twitter promotion made by a game developer in recent weeks: In August, Raven Lead Designer Manveer Heir promised to pay for everyone’s copy of Wolfenstein if the game beat Madden NFL 10 in August sales, although there was never any real risk of that happening. Neumann also suggested that Robert Bowling of Infinity Ward “should make the same mistake” with Modern Warfare 2. Bowling responded by preordering Borderlands and Twittering, “I admire your bravery good sir. Now loot me!”

Pokémon World Championships: Where Masters Are Made