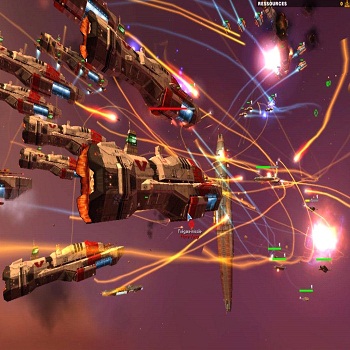 Get ready to see Karan S’jet in a whole new light.

The studio that brought you Aliens: Colonial Marines and Duke Nukem Forever is now going to work its magic on Homeworld, and while I’m perhaps being a bit harsh for the sake of a zing – after all, Gearbox is also responsible for the reasonably decent Borderlands and Brothers In Arms – I can’t say that my heart is aflutter with relief that it’s these guys who ended up with the rights to Relic’s storied space opera RTS.

“Brian Martel, Gearbox Software’s Chief Creative Officer, has great love and respect for Relic’s brilliant, fun and innovative game and personally spearheaded the acquisition,” Gearbox said in a press release. “Brian intends as first priority to direct Gearbox’s interest to preserve and assemble the purest form of the original acclaimed and beloved games, Homeworld and Homeworld 2, with the intent of making them accessible on today’s leading digital platforms.”

Snark over its recent track record aside, what makes this acquisition truly baffling is that Gearbox is the very definition of a “shooter studio.” Its first game was Half-Life: Opposing Force and everything it’s worked on since, with the exception of Tony Hawk’s Pro Skater 3, has been a shooter. So why the sudden interest in a real-time strategy title? It may be an easy way to score points with gamers for keeping the dream alive, as it were, but it sure doesn’t seem like a very natural fit.

Beyond what will apparently be either a remake or a GOG-style update of the existing games for modern systems, Martel invited fans to hit up the Gearbox forums with ideas about where the studio should take Homeworld in the future.

Deponia Developer Returns With Night of the Rabbit