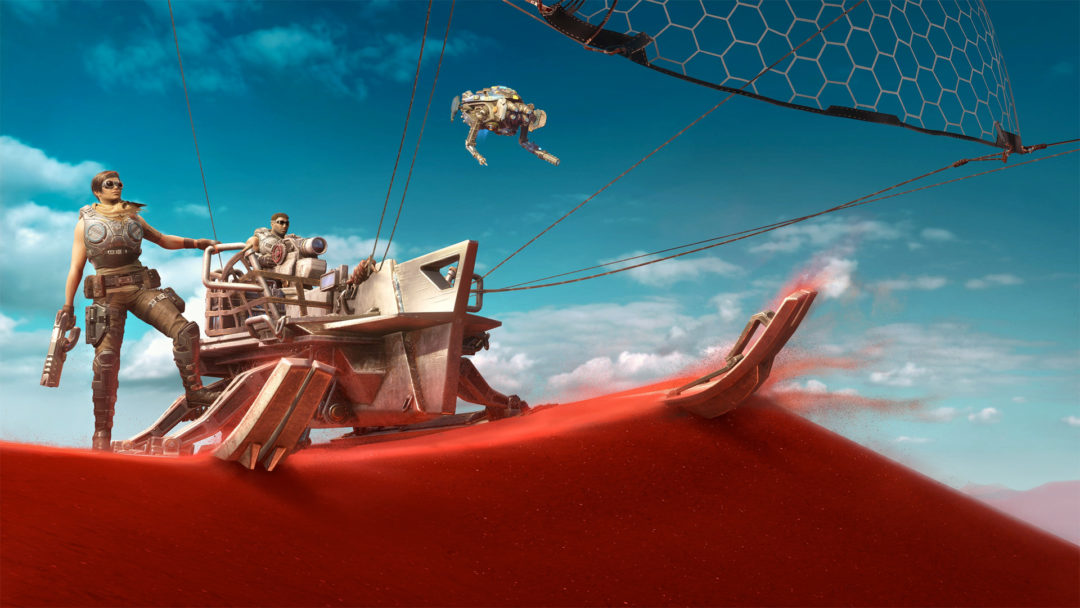 The Coalition held a preview event recently, and began opening up about the upcoming game’s single-player mode. The preview covered chapters two and three, which were set in an icy tundra and a crimson desert. Both biomes were traversed with the aid of the Skiff, a sort of wind-powered sled.

These environments were semi-open world areas, a departure from the Gears series’ tradition of highly linear level design. Squirreled away in the corners of these maps were collectible trinkets, resources, and RPG-style side quests. The locations of such points of interest can be revealed by using radio towers to scan for useful signals, in a riff on the Ubisoft-style “climb the tower to reveal the map” gameplay loop. Head of The Coalition, Rod Fergusson, says each of these quasi-open world areas is about 50 times the size of a typical Gears of War level.

Gears 5‘s newly opened up environments enables different play styles as well. Surveying battlefields before engaging enemies is now possible, where previous entries in the series tended to just throw players into the thick of combat. Stealth also plays a significant role for the first time in Gears history. While there are no robust stealth mechanics per se, targets can now be approached and dispatched instantly with lethal takedowns.

The game’s move away from strict linearity has also enabled the implementation of a light RPG progression system. Jack the robot is returning to the series, this time with far more tactical options under his belt. Jack can be upgraded along any of three skill paths through the installation of tech discovered through exploration or the completion of side quests.

Depending on how he’s modified, Jack will be able to participate in combat, such as by blinding opponents or harassing them out of cover; provide support to protagonist Kait Diaz and her squad, by boosting their health or cloaking them in a stealth field; or comb the battlefield collecting ammo and supplies.

Fergusson has said that Gears 5‘s campaign will last about 12 hours for a player barreling straight through the story, or over 20 hours for players who explore the game’s vast environments and complete all its sidequests.

Gears 5 comes out September 6 for Xbox One and PC.

Ready or Not Review – Escape to the Movies