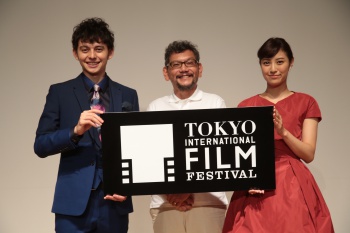 Hideaki Anno, director of Neon Genesis Evangelion, could be one of the next anime industry leaders following Hayao Miyazaki’s retirement.

The TIFF will feature a string of Anno’s previous works as “The World of Hideaki Anno.” This is the first time a major screening has showcased his works. The full line-up, including works in the Evangelion series, GunBuster, and Nadia the Secret of Blue Water, is listed online.

“When I was asked for an advice by the festival about launching Animation program, I came up with an idea of spotlighting on individual Animation filmmaker and I thought Anno might be the one after Hayao Miyazaki had announced his retirement,” Suzuki said. “I truly believe that Anno will be the successor in the Japanese animated film industry and animation can only be run by few talented people, and Anno is the one. You have to value the talented people like him. Anno is going to lead the animation industry for the next at least 10 years in Japan.”

Miyazaki directed many of Studio Ghibli’s movies, such as Spirited Away, Princess Mononoke, Nausicaä of the Valley of the Wind, and his last film, The Wind Rises. After going in and out of retirement for some time, Miyazaki finally retired after The Wind Rises. Studio Ghibli is now restructuring and temporarily shut down.

Anno and Miyazaki had worked together for years. Miyazaki hired Anno in his early twenties when he worked for Miyazaki as an animator on Nausicaä of the Valley of the Wind, and Anno voiced the lead character in The Wind Rises. Suzuki describes Anno as “the only man Hayao Miyazaki would ever acknowledge as his apprentice.”

Anno served as the director, storyboarder, and scriptwriter for the popular psychological mecha anime Neon Genesis Evangelion. It ran as a TV series in the mid-90s with a movie called The End of Evangelion serving as an alternate ending to the series. Anno has directed three more movies, with a fourth in production, in the “Rebuild” series of Evangelion.

Why I Am (Tentatively) Excited About Call of Duty: Advanced Warfare