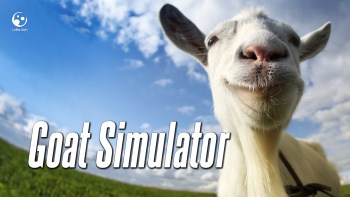 Early game of the year contender Goat Simulator will arrive on Steam on the most perfectly appropriate day of the year.

It may have started as a joke, but it’s a joke no more. Goat Simulator, which if I was being entirely honest I would admit probably isn’t going to contend for anyone’s game of the year honors, is a real, actual game that now has a real, actual release date: April 1.

“Goat Simulator was inspired from old-school skating games, where, instead of being a skater, you’re a goat, and instead of doing skating tricks, you wreck stuff,” developer Coffee Stain Studios said. “Charging into a table and knocking it over yields points, and if you can manage to do it while doing a backflip first and a 360 afterwards, you’ll score even more points.”

And thanks to the magic of Steam Workshop, fans will be able to expand upon the game with their own goats, missions, levels, stuff to break and more! It’s the next-gen goat simulator we’ve all been waiting for!

I stole that last line from the press release and the truth is that Goat Simulator will probably be awful, or silly and superficial at best, the kind of thing you bang around with for five or ten minutes and then forget about. But I also wonder if maybe there’s a kind of transcendental experience hidden deeper within, an elevation of the goat consciousness that can only be achieved after playing for many hours – the moment when you are no longer playing the goat, but have become the goat. And from there, who knows where your journey will take you? I can only hope that someone asks me to review it.

Researchers Pitch an Inflatable Airship to NASA for Venus Exploration

Suicide and Bullying: Can Video Games Be a Lifeline?