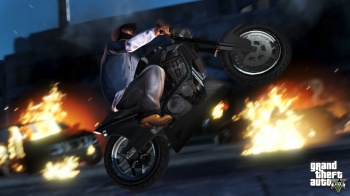 The $800 million rung up by Grand Theft Auto V in its first day of sales make it the most successful launch in videogame history.

It’s no surprise that an awful lot of people picked up Grand Theft Auto V on launch day, but day-one sales in excess of $800 million is still absolutely staggering. And that number excludes Japan and Brazil, where the game hasn’t yet launched.

“Once again, the team at Rockstar Games have outdone themselves, setting the entertainment industry’s new standard for creativity, innovation and excellence,” said Take-Two Chairman and CEO Strauss Zelnick. “Beginning at midnight on Monday, consumers around the world gathered in anticipation to be among the first to experience the evolution of this remarkable series. In North America alone, more than 8,300 stores opened their doors at midnight to welcome fans whose loyalty and enthusiasm were rewarded with what The New York Times called ‘the most immersive spectacle in interactive entertainment’. We are incredibly proud of Rockstar Games’ creative achievement and could not be more pleased with the success of this launch.”

The $800 million mark makes Grand Theft Auto V not only the best-launching game in Take-Two history, but also handily surpasses the previous all-time record-holder, Call of Duty: Black Ops 2, which put up sales of $500 million in its first 24 hours of release. It still holds the mark for “fastest to $1 billion in sales,” at 15 days, but since Grand Theft Auto V is almost there on its first day, I wouldn’t expect that one to hold for very long either.