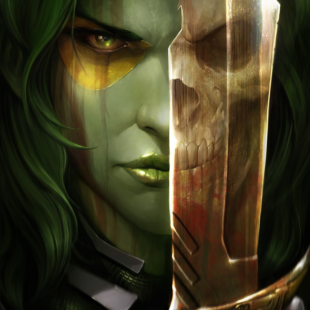 The Deadliest Woman in the Universe will be receiving her own monthly solo-series beginning “spring 2015.”

Guardians of the Galaxy was easily Marvel’s riskiest film to date. It’s only fitting then that it’s also been one of the company’s biggest hits. It just goes to show that with a trusted brand, a skilled director and, perhaps above all else, a fantastic script, anything (even a movie co-starring a talking raccoon and a walking tree) can draw in droves of moviegoers. Now, Marvel has announced that one of the key forces behind that script, co-screenwriter Nicole Perlman, will be receiving her own Guardians of the Galaxy solo comic series focusing in on the team’s main source of female bad-assery: Gamora.

The series, announced at New York Comic Con, will be titled Gamora and follow the titular character as she presumably beats evil aliens to bloody pulps. The publisher revealed few other details about the new series, but did confirm that it’s scheduled to release in “spring 2015.” It also featured cover art from Marvel regular Francescor Mattina. This, of course, will be the third solo series based on one of the Guardians, joining the ongoing books The Legendary Star-Lord and Rocket Raccoon.

The launch of Gamora will add another book to Marvel’s expanding line-up of female-fronted comics. Other recent additions include Jason Aaron’s Thor and Grek Pak’s X-Men spin-off Storm. Perlman herself became involved in Guardians of the Galaxy via Marvel’s now defunct Marvel Writing Program and while there is some dispute over how much of her original script was made into the final film, we’re nonetheless excited to see how her skills translate from the big screen to the inked page.

Quiz: Which Borderlands: The Pre-Sequel! Character Are You?

8 Villains Who Could Menace The Flash