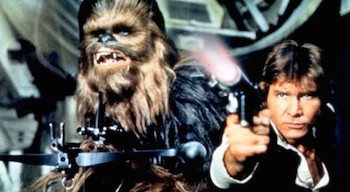 Star Wars: Underworld would have explored the seamy underbelly of the Star Wars universe.

There’s been talk for years that George Lucas was trying to launch a live-action Star Wars TV show. Now that Disney has consumed everything Star Wars related (presumably by unhinging its jaw like a snake), more details have spilled out about the now-dead project. Entitled Star Wars: Underworld, it would have explored the backstory of everyone’s favorite scruffy-looking nerf herder, Han Solo.

Years ago, when Star Wars producer Rick McCallum mentioned doing a show about the criminals and gangs of Star Wars, we now know exactly what he was talking about. In addition, we now know that Underworld would have had stories about key moments in Han Solo’s life, such as the time he won the Millennium Falcon from Lando, or met Chewbacca.

While prohibitive costs kept Underworld from seeing the light of day, hundreds of scripts were written. Those scripts are now in the white-gloved hands of Disney. The House of Mouse is currently planning a TV show of its own, the animated Star Wars: Rebels, so it’s doubtful if anything will become of Underworld. However, with all the Star Wars spin-offs that Disney is looking at producing in the coming years, chances are good that we might get to see a young Han Solo running from the law at some point.