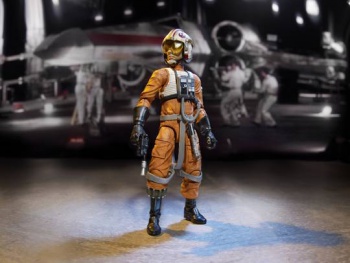 One of the difficult steps on a nerd’s road to adulthood is when his or her toys cease to be playthings and become display pieces instead. When the hours of lightsaber fights, space battles, and daring rescues give way to Obi-Wan and Luke standing regally side-by-side on display stands, it’s easy to feel that some of the magic is gone. Still, growing up has its advantages: Having your own money means you can take part in the growing adult collector’s market. Hasbro, producer of many, many, many Star Wars toys, is launching a 6″ action figure line called The Black Series specifically for grown-up fans of the classic sci-fi franchise.

Anyone who has had children, been a child, or set foot in a toy store in the last twenty years or so is probably at least marginally familiar with the 3 ¾” Star Wars toy line. While the figure selection covers almost every character imaginable from the movies and TV shows (with a few from comics and books for good measure), they’re made to withstand play rather than to look good on a shelf. Not so with Black: these 6″ figures will feature detailed sculpts and articulation well in excess of their smaller brethren. Of course, for parents who want to share with their kids, the toys will be able to weather a little roughness. “We consider them the best figures that Hasbro’s ever produced for Star Wars that meets (sic) the sensibilities of romancing the character as well as the playability and poseability that fans really appreciate,” says Derryl DePriest, a vice president at Hasbro.

The first wave will debut in August for about $20 a pop, and include four iconic characters: Luke Skywalker in his X-Wing garb, astromech droid R2-D2, taciturn villain Darth Maul, and the easily misled Sandtrooper. Future waves will again focus primarily on characters from the original trilogy, but will sprinkle in some prequel personalities here and there for good measure.

“Our focus here is the adult collector,” explains DePriest. “We know they have their own generation of youngsters they like to share the adventure with.” Even if you don’t have any Padawans of your own, the Black series seems like a good compromise between the cheap 3 ¾” toys and some of the most expensive Star Wars memorabilia out there.