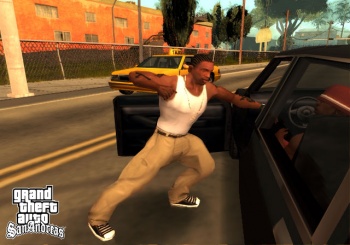 Rockstar Games released Grand Theft Auto: San Andreas back in 2004, but somehow model and former Cypress Hill back-up performer Michael “Shagg” Washington didn’t get the memo and just noticed that, according to him, it has a strong similarity to his life. So strong, in fact, that Washington feels Rockstar owes him $250 million.

Washington has sued Rockstar Games for this exorbitant amount, alleging that it used his image without paying him. He was interviewed by Rockstar in 2003 for nearly two hours over his past so it could potentially be used in San Andreas. Rockstar told Washington that it would notify him if it decided to use his likeness in the game, but he never got a call.

Fast forward to July 2010, when Washington’s nephew reportedly showed him some of San Andreas‘s gameplay. Washington found main character Carl “CJ” Johnson to be a clear representation of himself, and he started putting together a lawsuit over fraud, misappropriation of likeness, and infringement. Rockstar Games credits rapper Christopher “Young Maylay” Bellard as the basis of Johnson, not Washington.

Washington is suing for $250 million because he says it’s “25% of San Andreas‘s profits.” The lawsuit claims that Washington doesn’t play videogames, so he somehow never even saw a screenshot of San Andreas until recently. During his interview with Rockstar, he says that he talked about “details of his street life,” including how his gang used to ride around on bicycles. There doesn’t appear to be information available about something that might be more specific than these bicycles.

Washington’s lawyer made this lame statement: “It’s hard to believe that the makers of a game that allows you to shoot at cops, pick up prostitutes, and run over pedestrians at will, would actually cheat somebody out of money, but this seems to be the case.” Way to be creative.

Take-Two Interactive, parent company of Rockstar Games, says: “The company believes the lawsuit is completely without merit and will vigorously defend itself in the matter.” Unless there’s a particularly damning similarity we don’t know about yet, I don’t think Take-Two will have much trouble.

Carl Johnson is a pretty regular looking dude until he’s made fatter or given a new haircut by players, so I doubt the likeness argument will hold up, plus Johnson looks exactly like Bellard. The missions in San Andreas are so spectacular that it’s unlikely anybody actually lived through most of them (especially that damn RC helicopter). This lawsuit is probably just the result of someone with dollar signs in their eyes.

Is This the Leaked Ending of the Next StarCraft 2?