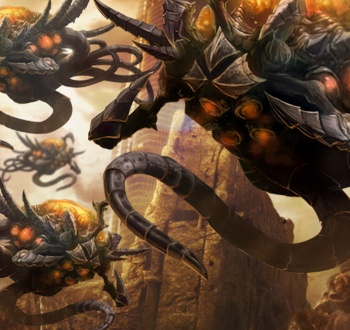 The only way to Zerg, is to go full-on Zerg.

For many players of the first StarCraft, it was a huge shift to play as the insectoid Zerg race. You start out playing the human Terrans, and while they had speculative weaponry and sci-fi doodads, the race played similar to other RTS games. There were infantry, tanks, etc. After the Terran single player campaign, though, you are given control of the Zerg and they play completely differently. With their hatching and larvae and crazy overmind telling you what to do all of the time, it can be difficult for a player to wrap his head around a totally different set of strategies.

But after a friend shows Brendan Main how to beat the last level of the Zerg campaign with the lowliest unit, he realizes that he wasn’t going “Zerg” enough, perhaps because he hated almost everything about the stupid bugs. He explains the leap of logic he made in issue 248 of The Escapist:

I’ve never set aside the lesson that I learned that day. So now, when I go Zerg, I try to see the game through their eyes – their hideously undulating, multifaceted eyes. From that perspective, the Zerg stop seeming like rubbery castoffs from some Jim Henson backlot and start looking lean and lethal, ready to tear the universe a new asshole. When I go Zerg, I crawl into their insectoid minds fully and completely, watching wave upon wave of Zerglings rushing over the battlefield with satisfaction and a malicious joy.

Read more of what Main learned about himself and the strategy of the Zerg in Only Zerg Rush In. He really should just play Protoss; I think that’s more his speed.