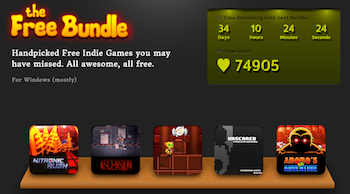 While the last big Humble Bundle might have been a good deal, it certainly wasn’t very indie. Perhaps that’s why two fellow indie devs, Javier and Carlos Cabrera, released “The Free Bundle”. With the self-stated purpose that “[w]e want to give REAL indie developers a chance to show their work”, the bundle is a collection of indie titles that deserve more attention. Also, they’re all completely free, which is attention getting enough.

The bundle features a nice eclectic mixture with some rather interesting titles. Wrapped up in neon Tron stylings, Nitronic Rush looks like an arcade racer with Rush 2049 influences. Ascension drips with atmosphere and offers psychological horror as a groundskeeper searches for his sick daughter. Celestial Mechanica is a platformer with “a touch of soul.” Imscared might look like an ancient FPS, but it plays up its lo-fi graphics to a great psychological effect. Finally, Abobo’s Big Adventure is what would happen if you went on a head-punching rampage though your classic NES library.