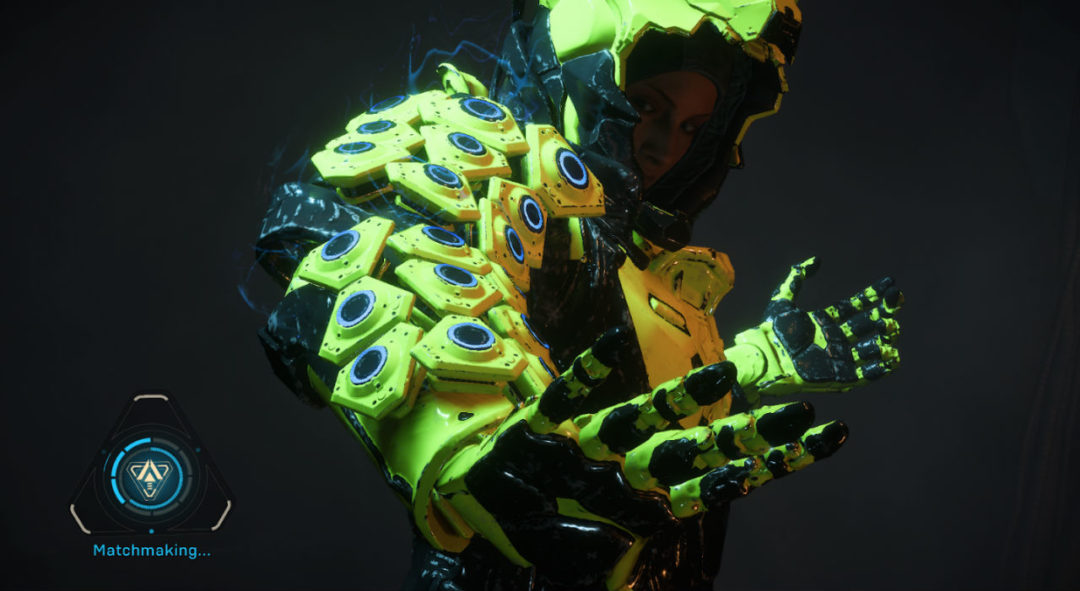 Last week I said that Anthem doesn’t care about its own story. That isn’t the most obvious problem with the game or even the most serious, but I thought it was the most interesting. Anthem’s developer BioWare is primarily known for strong narratives, but the one in this particular game is weak.

I’ve spent a lot of time criticizing this game over the last few weeks, and there’s a lot to criticize: The baleful loading screens, the obtuse mechanics, the shallow endgame, and the bland loot. On top of those are a laundry list of technical problems to annoy the player.

On the other hand, I see that — as of this writing — Anthem has a score of 60 on Metacritic. That puts it way behind the misbegotten Mass Effect: Andromeda. Our own Riley Constantine savaged it with a 4 out of 10. That’s understandable, particularly if you’re a BioWare fan and you go in expecting the game to live up to that legacy. While I agree that this game has many problems and is a huge disappointment to anyone hoping for a BioWare-style roleplaying experience, I want to make the case that it’s not that bad when judged as a looter-shooter. I think Anthem is better at being a looter-shooter than Andromeda was at being a game about roleplaying and exploration.

EA has never been anyone’s favorite publisher, but in the last couple of years it’s reached new heights in generating customer distrust, animosity, and outrage. I’m worried that Anthem isn’t really being punished for its own sins so much as the sins of its publisher. This is a competent shooter that’s short on content, not a horrible train wreck full of bad ideas.

In the interest of trying to be positive for a change, I’ve listed some things that Anthem gets right:

1. This Is a Pretty Game

Even taking into account the flagrant and egregious graphical downgrade since the E3 2017 debut, this game still looks fantastic. It’s really aggravating that EA’s marketing felt the need to make the E3 demo look so implausibly good and pretend it was going to be representative of the final product. Consumers know better by this point. When the game finally reached us on release day, people focused on how poorly it looked compared to what was promised instead of how good it looked on its own merits. Publishers need to stop doing this to themselves.

It’s true that lots of other industries over-promise in terms of appearance. Fast food is a notorious example. But the video game industry takes this technique to a ridiculous extreme. McDonald’s might promise me a nicer burger than they plan to deliver, but EA’s marketing promised me nicer graphics than are physically possible on the target hardware. That crosses the line from exaggeration to lying, and I don’t think it does either party any good in the long run.

It looks like BioWare finally got a handle on using the Frostbite engine. Despite using the same engine as Dragon Age: Inquisition four years ago, Anthem looks to be an entire graphics generation ahead. I’m using the same hardware, yet Anthem runs more smoothly on higher settings, and does so with more stability.

The beauty of Anthem goes beyond its ability to push triangles. The game is also beautiful artistically. There are a lot of games out there about shooting things, and it gets very hard to tell them apart after a while. But Anthem is distinct enough that a single screenshot can immediately reveal you’re not looking at one of those other games. The environments, the clothing, the architecture, and the technology are all visually unique.

2. The Shooting Mechanics are Solid

This is the one thing that the developers really needed to get right, and it’s an easy thing to get wrong. It’s not that hard to make some basic shooting mechanics and AI foes that can keep the player engaged for a few hours in the context of a single-player game, but it takes a lot of skill and dedication to make a system that can keep people engaged for days, weeks, or even months. I know Bungie makes it look easy, but this is a tough genre, and BioWare had no experience with it.

For one example, look at what happens when a player kills a common mook with a headshot in Destiny 2:

A single headshot will create two particle effects, three sounds, two different interface reactions, and an animation. The timing and presentation of everything is carefully balanced so that the event is visible enough to be viscerally satisfying without becoming repetitive or distracting. This headshot feedback is just one detail out of dozens, but it illustrates why so many other games have shooting that feels monotonous. A lot of work and testing went into these little details.

I won’t say that Anthem has matched the gameplay of Destiny 2, but it’s done really well. Anthem’s headshots are pretty underwhelming, but the developers put some time into making a lot the the various melee hits feel pretty good.

As a matter of personal taste, I’d prefer if the enemies had a bit less health and there were a few more of them, but the fact remains that BioWare has delivered a better experience than I would have expected from a bunch of storytellers.

3. The Server Infrastructure is Stable Now

During the demo, Anthem was plagued by disconnects, stalled matchmaking, and other server problems. Those were serious issues, but since the first big patch everything has been fine. I’ve never run into a single case of rubber banding in my dozens of hours with the game.

The matchmaking is quick and painless. You pick what mission you want to do, and a few seconds later the game finds three other people doing the same thing at about the same level. If it wasn’t for the horrendous loading screens, the experience would be completely seamless.

The game features four different javelins, and each one feels completely unique. The Interceptor is a ninja that leaps around the battlefield slicing and dicing enemies. The Storm hovers over the fray, calling down area lightning like a robotic wizard. The Colossus is a big stompy wrecking ball that can charge through enemies, knocking them over like bowling pins. The Ranger also exists and if anyone ever plays it past the tutorial, feel free to let the rest of us know if it’s any fun.

Loot drops are tied to your pilot level, but the game will match you against foes appropriate for your gear. If you’ve hit the level cap and are looking to try one of the other javelins, you don’t need to grind through those first 30 levels again. You can just jump into the fray and begin looking for gear.

Moving around the battlefield feels really good. Flying around the world is liberating. Going back to Destiny 2, I get frustrated by being glued to the floor. The vertical mobility makes Anthem an exhilarating game to play.

5. The Microtransactions Are Reasonable

The developers promised that the microtransaction store would only sell cosmetic items, and furthermore that everything could be earned through gameplay. The ability to buy items was just for people who didn’t want to wait to earn their desired costume. So far, that promise has been kept.

The prices are reasonable so it doesn’t take very long to earn the items you want. While Fallout 76 is selling costumes for a laughable $20 or $30, the prices in Anthem seem to top out around $8. Many items cost just a dollar or two, which is what I think the price of microtransactions should be.

If anything, the cosmetics store is too conservative. I’ve already bought all the stuff that interests me and I’ve still got a lot of in-game money left over. I wouldn’t mind having more stuff to buy or earn.

A lot of people take the position that since this is a full-price AAA release, it shouldn’t have any microtransactions at all. I understand if the presence of a cash shop is a deal breaker for you. But if you’re OK with the idea of a cash shop in a full price release, then this is one of the tamest examples I’ve encountered.

While I think that Anthem‘s reputation as a terrible game is largely undeserved, I’m not claiming it’s a masterpiece. This is still a game that’s short on content.

The important thing is that there’s still hope for Anthem. BioWare’s previous title, Mass Effect: Andromeda, wasn’t just janky and full of hilarious animation glitches. It also featured a dull setting with barely any aliens to meet and a ridiculous bore of a main villain. Time could have fixed the technical problems with Andromeda, but it had serious design flaws that went right to the core. No amount of polish was going to fix that.

For contrast, Anthem is just a couple of balance and content patches from being a solid entry in the genre. The developers need to make the loot a little more interesting, make the mechanics a little clearer, and add more strongholds for people grinding in the endgame.

I can’t recommend Anthem just yet, but after a price drop or some content patches it will definitely be worth a look. Just don’t go in expecting BioWare to tell you a story. They’ve apparently forgotten how to do that.