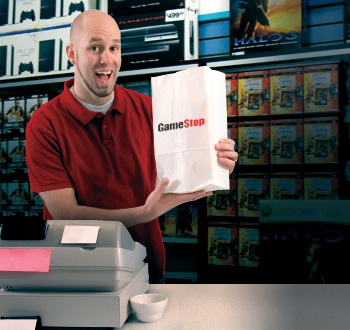 Are the employees of specialty retailers like Gamestop the proud holders of the Key to the World of Gaming? Or are they just normal gamers on the other side of the counter?

We don’t live in a world where the folks manning the counter at Gamestop are downtrodden plebeians who exist only to serve our every need (while asking us if we want to preorder the new Madden). We all know it, that they’re just gamers just like you and me, but their job involves stocking and shelving videogames rather than writing TPS reports. But for all they stay connected, with their finger on the pulse of the industry, does viewing games through the lens of publishers and retail value give a skewed view of how things are going? In Issue 224 of The Escapist, Gamestop assistant manager Jason Fanelli wonders if this is the case.

But while my coworkers have exposed me to what would become some of my favorite games, I still feel as if I could be more immersed in the industry. Even though I’m helping to sell their products, I feel disconnected from the game makers themselves. Most of the information I’ve gathered about the gaming world (developers, personalities, etc.) I’ve had to find on my own rather than at work. Names like Tim Schafer, Cliff Bleszinski, and Reggie Fils-Aime would be unknown to me if I hadn’t seen them online. Dead Space was developed by Visceral Games, the same studio behind The Godfather; but if my knowledge came solely from GameStop, I would think it was just EA behind both titles. To some, it’s a trivial distinction, but if the fans of the games we sell know the difference, then I feel we should as well.

Do you have to be a fan of gaming to sell games to customers? Nah. But it certainly helps. To read more about the view from the other side of the shipping box, check out “Behind the Counter at GameStop” in Issue 224 of The Escapist.