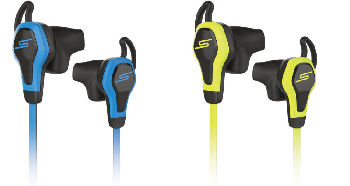 Intel’s new partnership with SMS Audio will work towards developing a fitness-focused line of headphones.

Today, Intel announced a partnership with SMS Audio– the headphone company owned by rapper Curtis “50 Cent” Jackson. Coupled with this news was also the unveiling of the pair’s first joint project: a pair of earbuds called BioSport In-Ear Headphones that can track its wearer’s pulse. The device is part of Intel’s continued efforts to break into the wearable tech market along with its acquisition of fitness-band manufacturer Basis Science.

According to Mike Bell, general manager of Intel’s New Devices Group, the BioSport In-Ear uses optical sensors that can monitor blood flow through the skin to provide wearers with an accurate but noninvasive heart-rate reading. The sensors used by the device in this process are developed by a third-party company- one which SMS Audio and Intel have chosen not to disclose. Users are able to view that data using the RunKeeper app developed by Boston-based company FitnessKeeper. RunKeeper will also allow users to track their distance and speed, which is monitored using a smartphone’s GPS system. The headphones are also resistant to perspiration and other forms of moisture, and have a patented ear-hook design to help provide a comfortable fit.

In an interview, Bell remarked that the new headphones help lay out part of Intel’s strategy in wearable technology, explaining that Intel aims to incorporate new features into devices in a way that keeps them discrete when worn in public. Such goals are visible in the BioSport In-Ear via its ability to use a smartphone’s audio jack as a power source, which keeps the device battery-free. To the untrained eye, these headphones appear to be just that- another pair of headphones.

It is estimated that the BioSport In-Ear will go on sale later this year, and its price has yet to be determined.

Share your thoughts in our comments section, and stay tuned to the Escapist for all your Science and Tech news!