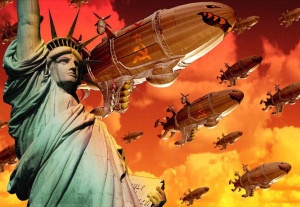 Electronic Arts has announced that Command & Conquer: Red Alert 3 is in the works.

Through the franchise’s website, which regularly hosts faux-news announcements in a format that combines elements of CNN and ESPN, game Product Manager David Silverman and Executive Producer Chris Corry said the third iteration was on its way.

Though details were sparse, Corry said the game will feature not only the Allies and Soviets, but a third faction “unlike anything you’ve ever seen before.”

He also said the game’s campaign will be built from the ground up to accommodate cooperative play, with custom computer-controlled generals for those who want to play alone.

The last entry in the franchise was produced in 2000.

No Goldeneye on Xbox Live: Microsoft

Overlord Arriving on PS3 This Summer