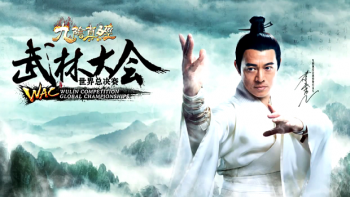 Li, the star of classic martial arts flicks such as Hero, The One and Fearless was the V.I.P at the recent Age of Wushu global PvP tournament in China.

Jet Li is a pretty big shot actor in the world of martial arts cinema. He has starred in Hong Kong movies such as Hero and Fearless, as well as Hollywood flicks like The One and Romeo Must Die. He is also one of the official spokespeople for Age of Wushu, a Chinese martial arts-based MMO. At a recent global PvP tournament in China, he spoke about his interest in videogames, and his thoughts on the competitive scene, comparing professional gaming to professional chess or poker.

When asked his opinion of videogames as a sport, Li said, “If poker card games and chess both have the players sitting down and are considered sports, why not virtual gaming as well? There are 2 kinds of sports, 1 physical and 1 mental. There is no good reason to debunk virtual gaming as a sport, and I believe the participants of such virtual PvP events have the same mentality as physical athletes.”

Li went on to state that he has had an interest in games since a young age, and he thinks that Chinese games will become market leaders in five to ten years. He wants Chinese games to spread Chinese culture to the rest of the world, and wuxia games like Age of Wushu are some great examples of this.

As for his own perfect game, Li wants to make a game where players are free to make choices, but are still be able to make up for making the “wrong” choice. “I told the American developers that killing innocents in a game will gather some negative energy, but positive energy can be claimed by doing the right things. This will lead to players having multiple choices at each turn.”

Snail Game’s CEO Shi Hai is apparently in talks with Li to produce an Age of Wushu movie.

Thief Preview: Will it Steal Our Hearts?