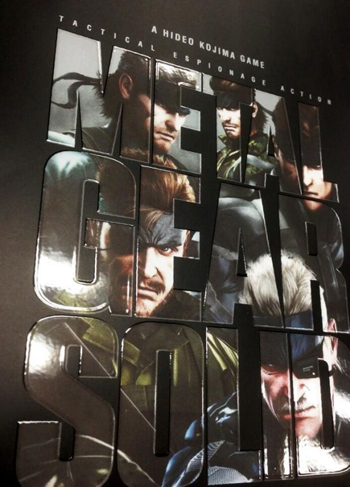 No, it doesn’t include Twin Snakes. Or Portable Ops.

Likely, the first question to emerge, half formed, from your quivering lips, is “Is Twin Snakes in there?” And the answer is no. No Twin Snakes. No. Not now, not ever. Twin Snakes was a Nintendo exclusive, and will likely remain so until someone can prise it from Satoru Iwata’s cold dead fingers.Neither of the Portable Ops games are in there either, but their canonicity has always been a sticky issue.

“We wanted to give Metal Gear Solid fans the opportunity to experience the series from beginning to end, all on one console,” said Konami president Tomoyuki Tsuboi. “With the collection’s multiple titles, players can truly see how Metal Gear Solid evolved into the critically acclaimed and beloved franchise it is today.”

At this point, most Metal Gear fans will own multiple copies of each game in the series, so the bundle’s sales potential will likely be determined by two factors; How much it costs and how fancy the box is. If I recall correctly, this will be my fourth copy of MGS3, so that box had best be at least moderately fancy if Konami wants my hard-earned dollars.

Deponia Developer Returns With Night of the Rabbit

This is What Happens When You Wring a Washcloth in Space