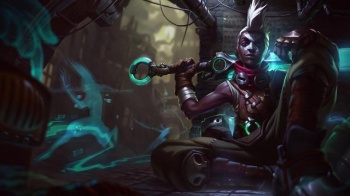 Ever get stuck in a 4 v 5 because a teammate disconnected at the start of a game? This new League of Legends patch will fix that!

League of Legends‘ 40-minute plus long matches ask for a pretty big time commitment from players. Being stuck in a losing game and forced to wait the whole thing out sucks big time – especially when you are down a player right from the get-go. Thankfully, Riot has now finally implemented a solution for 4 v 5 games – /remake. Basically, if a team member disconnects or leaves at the start of the game, the remaining 4 players have an option to “remake” the game, getting spit back into the lobby without penalty.

Here are the details:

/Remake will be available in all of League of Legends game modes, with the exception of bot matches, and ranked matches in Diamond V and above. It will hit the NA servers first, before eventually being rolled out worldwide in patch 6.11.

This is a great move, but honestly, it’s about six years too late. Playing a 4 v 5 in League of Legends is honestly one of the worst feelings in gaming – especially as the game actively punishes you for “abandoning ship”, forcing you to spend up to 40 minutes in a hopeless battle.

8 of the Hardest Games of All Time