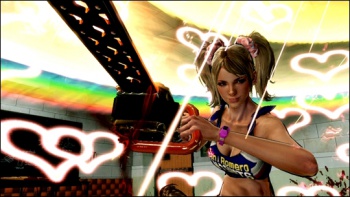 Designer Suda51 says his latest project is all about giving the world its first funtime zombie adventure, complete with “hearts and rainbows.”

Lollipop Chainsaw, it seems, aims to misbehave. No more of this macabre, slightly scary horror zombie stuff, says lead designer Goichi “Suda51” Suda; instead, let’s have a teenage cheerleader with an accessorized chainsaw mow her delightful way through the undead hordes with a healthful dose of sparkle and fun.

Speaking to IGN UK, Suda51, head of studio Grasshopper Manufacture, elaborated on his vision for Lollipop Chainsaw. When asked how he’d describe the game, he replied that it’s a “zombie-hunting cheerleader who is working to uncover the reason behind a zombie outbreak…armed with a chainsaw.”

“A fun, happy zombie game has yet to exist,” he continued. “Lollipop Chainsaw is the only zombie game that has hearts and rainbows. It is a game you can enjoy with popcorn! Gritty, realistic zombie games already exist, so there is no need for us to make them. Rainbows are scattered everywhere in Lollipop Chainsaw to highlight the fact that this is a fun, but offbeat game.”

One of the game’s biggest draws will be Juliet, its scantily-clad cheerleading heroine. “I wanted to give birth to a video game heroine who supersedes past female video game characters, so here Juliet makes her debut!” enthused Suda51.

Given the decidedely surreal tone of much of Grasshopper Manufacture’s past work (including titles such as No More Heroes, Killer7 and Shadows of the Damned) it wouldn’t have made sense to expect a normal zombie adventure from this particular studio. Still, a cheerleader deterring the apocalypse with chainsaws, rainbows and love? There aren’t many other studios which could even hope to pull this off; but since Suda has good form for this brand of weirdness, count me in.