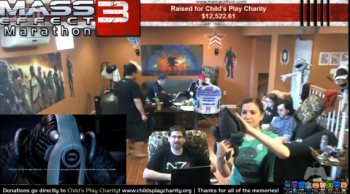 Not content with just saving the galaxy, Commander Shepard is going to blow the weekend doing a solid for charity.

The “videogame marathon for charity” scene is pretty well dominated this week by Desert Bus, but they’re not the only game in town. The good folks at G33kWatch are at it again too, once again bringing Commander Shepard and his band of intergalactic sociopaths into action to raise funds for Child’s Play. You may recall them doing the same thing last year, and since the original event in November 2010 the Mass Effect Marathons have raised nearly $50,000 for the charity.

The Mass Effect Marathon 3 is actually a two-parter: The group spent October 20 playing the original Mass Effect plus Bring Down the Sky and Pinnacle Station, but this weekend will be considerably more hardcore, dedicated to both Mass Effect 2 and 3 in their entirety. As usual with this sort of thing, the G33kWatchers will undertake various stunts and challenges, and hold raffles and live auctions for some seriously fantastic Mass Effect stuff including the Xbox 360 console on which every Mass Effect Marathon has been played (complete with a “so far, so good” guarantee) and a full suit of custom-sized N7 body armor. Viewers can vote on Shepard’s “big decisions,” and donation goals will determine who lives and who dies in the infamous suicide Mission.

The Mass Effect Marathon 3 is underway now and scheduled to run until 6:00 pm EST on November 25. Catch the action at masseffectmarathon.com.

Thanks to shado_temple for the tip.