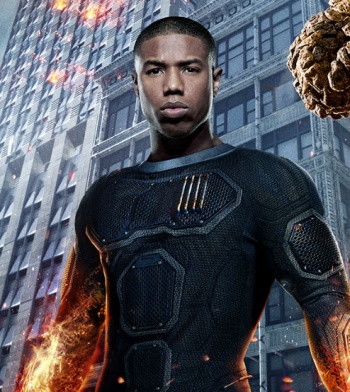 Michael B. Jordon has called his time on Fox’s Fantastic Four a “lesson”, and has no regrets on the experience.

Most of us at The Escapist weren’t impressed with Fox’s Fantastic Four, and have no problem dissecting its faults or dreaming up superior versions. But we also had no stake in the film – reading all the negative reviews had to hurt if you were an actor on set. But Michael B. Jordan, who played the role of Human Torch Johnny Storm, seems to be taking it in stride. In fact, he considers the whole thing to be a learning experience, one which seemingly hasn’t soured him on superhero films.

“I got out of there pretty clean,” Jordan said when asked about Fantastic Four‘s bad press on Bill Simmons’ podcast. “It’s one of those things where it was a lesson for me that really made me realize that things aren’t in your control.

“You can get up everyday and be like ‘I’m going to give 110% to this one thing’ or to anything and [it’s still not going to turn out] how people want it,” Jordan continued. “It doesn’t mean that you’re a failure or it doesn’t mean that you didn’t do a great job, it just means that as a whole, as a project, there are so many other pieces that are moving that have nothing to do with you that determine the outcome of a film.”

It’s a healthy perspective to have, especially since Fantastic Four didn’t hurt Jordan’s career at all. His performance in the new Rocky sequel, Creed, has received glowing praise from multiple outlets, including our own. Fantastic Four will likely be a blip in an otherwise great year for Jordan, one which he still doesn’t regret.

“I would gladly do again,” he said. “[Being] a comic book fan, it was just like a dream come true being able to play that character.”

And let’s all remember: Before 2015, the last person to play Johnny Storm in a bad Fantastic Four film went on to lead the freaking Avengers. If Jordan returns to superheroes in a few years, who knows? Maybe he’ll give us something truly spectacular.

The Cards Against Humanity Black Friday Sale Is Insane, and it’s Working

This Hypergiant Star Is Shedding 30 Earths A Year