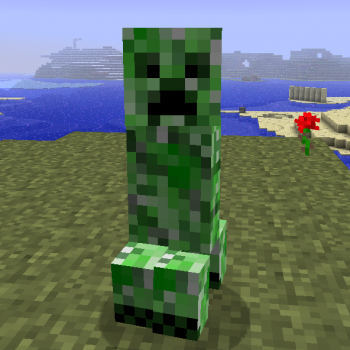 Minecraft makes its way to Xbox One Friday for a small fee for those that bought it on XB360. PS4 should arrive soon.

Everyone’s favorite world-building block simulator is headed to Xbox One on Friday, September 5th. Best of all, those that bought the game for Xbox 360 only have to pay a small upgrade fee of $4.99 (£3.99). Along with getting the (now) current-gen version of Minecraft, those upgrading will also transfer in all their DLC (like the Doctor Who kit) and worlds from the 360 version. Newcomers to Markus “Notch” Persson’s indie sandbox title can expect to pay $19.99 (£14.99).

The Xbox One version comes with improvements to the co-op experience, allowing up to four players on split-screen and eight online. The worlds are also expected to be up to 36 times larger than the 360 Minecraft. 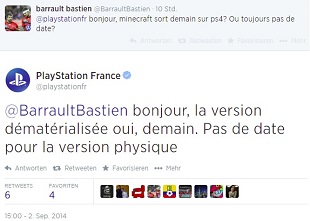 The PS4 and Vita version of Minecraft was planned for August, and a tweet yesterday from the PlayStation France Twitter account stated the digital version would release today, but there was no date for the physical version. The tweet has since been removed.

However, earlier today Daniel Kaplan of Mojang tweeted that the PS4 version should be out today, but since that, Mojang developer Jens Bergensten tweeted that they ran into some “show stoppers” (referring to bugs) which caused another delay.

The PS4 version will also have the same features outlined for the Xbox One, according to a post on the PlayStation blog in June by Mojang’s Owen Hill. This include the upgraded from the PS3 version for a small fee and the imported DLC and worlds. There are still no details on the Vita version, but we know those on PS3 and Vita won’t get to play online with PS4 players.

Minecon may not be happening until 2015, but hopefully the Xbox One and PS4 versions will entertain Minecraft fans for a little while.

The Rock is Black Adam