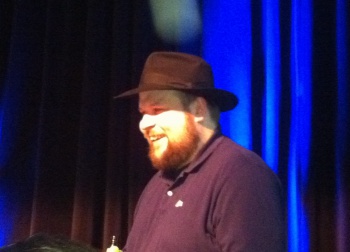 Markus ‘Notch’ Persson wants to use his cash to make the world a better place.

“It’s weird as fuck,” says Notch. “I grew up in a relatively poor family, but once I got a decent job, I never really had to worry about money.” These days the man who made Minecraft has rather more cash than he’d ever anticipated – $101 million in sales in 2012 alone – and he doesn’t know what to spend it on. After all, once you have a decent gaming rig, and maybe a new car – Notch doesn’t even know how to drive yet – what else is there?

Notch, who finds it extremely strange to have his earnings talked about in the news, wants to use some of his cash to make the world a better place. “For me,” he says, “this includes charities that help children, and charities that help promote freedoms I think are vital in the coming dozens of years, such as the EFF.”

Notch went on to say that selling Mojang stock, even giving it to staff as a bonus, isn’t where he intends to take the company. “We focus on trying to be as fair and permissive with our employees as we can,” Notch says. “If people agree to work for us, we’ll pay them, but we won’t claim to own them. People can make games in their spare time, they can somewhat flexibly move between projects as they wish.”

The comments came as part of a not-quite-AMA Notch found himself hosting on Reddit. It wasn’t what he thought he’d be doing; he was actually trying to play Ni no Kuni, but questions about his net worth kept getting in the way.

Hence the $101 million, and the oil paintings, and whatever else it is Mojang will get up to next. That said, there are worse fates than not knowing what to do with all that cash; and, on the whole, it couldn’t happen to a better fella.

CoD of Duty Shoots Fish in a Barrel

Hobbit Theme Park May Become Reality… Or Not