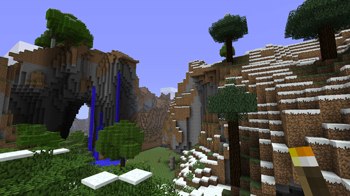 MInecraft‘s exclusivity deal with Xbox 360 will need to end before it can go to other consoles.

Minecraft, the game that’s been earning massive profits on Xbox Live, has an exclusivity console deal with Microsoft; but when that ends, the option opens up for other console ports. Mojang’s Jens Bergensten, in an interview with iGamer, has said that Minecraft‘s creator would be interested in working on a PlayStation port, when it gets the chance.

However if you’re a Nintendo gamer, this doesn’t bode well, as Bergensten went on to say that a Wii U deal was “very unlikely.” The very fact that Bergensten mentions the possibility of a port shows that the exclusivity deal wasn’t in perpetuity, but as to exactly when it runs out, nobody – other than Mojang and Microsoft – knows.

Minecraft has brought Mojang, and Markus Persson, more money than even Notch knows what to do with. Its sales records on Xbox 360 have been excellent so far; a trip to the PlayStation, whenever it comes about, can only be a winner for Mojang.

Slender: The Arrival Opens Up Its Beta