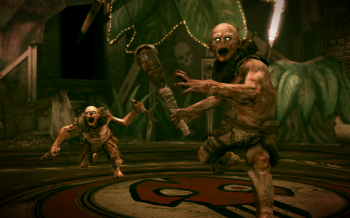 Budding modders will be able to mess with id’s Rage right out of the box.

Gamers have been modding id games since the company’s early days, partially due to id’s encouragement of the act. Don’t expect that to change in the least for upcoming shooter Rage. Id has announced that the PC version of Rage will not only support modding, but launch with with Rage‘s “id studio.”

Which basically refers to id’s own design tools used for the game. Id creative director Tim Willits told PC Gamer that Rage will ship with these tools so modders can jump right in.

“Pull down the console, type ‘id studio’, then press enter,” Willits said. “Then, bam, there’s all the tools we use.”

Willits believes that modding Rage will be a challenge when moving beyond exterior elements. “Building levels from scratch is more difficult because we have a layer system in some of the levels,” he added. Willits predicts that lots of people will alter the game’s already developed towns with new NPCs and the like. However, the ability to dig into the tech is “built into the engine” for modders that want to go deeper.

As a wee lad, I still remember loving a Doom II WAD that made the enemies die in much more horrific and bloody ways. In today’s complex gaming world it’s a little harder to do the exact same thing, but it’s nice that id continues to see the value in giving players the opportunity.

Turn Your Dead Space 2 Plasma Cutter Into a Real Weapon!