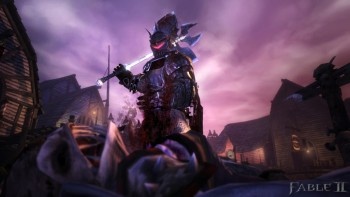 Given the choice between good and evil in a game, says Fable mastermind Peter Molyneux, Americans tend towards good much more than Europeans or Japanese do – in fact, only 10% of American gamers choose to follow the evil path.

Peter Molyneux, to quote one caustic-tongued Brit-turned-Aussie, is all about giving the player “motherf***ing CHOICE!” in his games – and while said choices do usually boil down to the extremes of Mother Teresa vs Sauron, they’re still choices. Molyneux spoke with GameSetWatch about the importance of choice in his games, and how players viewed the options of good and evil.

The implications of a clearly good side and a clearly defined side have a strong effect on human perception, said Molyneux, pointing to his 1989 god game Populous, where journalists who reviewed the game told him “that they thought the red (evil) game faction was more cunning or vindictive than the blue. In fact, the two sides had the same AI, showing both preconceptions and how choosing good or evil can make things feel very different.”

Interestingly enough, Molyneux also claims that people find it hard to be evil in games, “especially Americans.” In comparison, European and Japanese gamers are “more liberated,” in the sense that they’re more accustomed to using fantasy as a vehicle for escapism: “As many as 40% of [Japanese gamers] choose the evil side in the game. In contrast, only 10% of Americans playing the title ended up getting evil, in-game.”

I don’t know about you, but I kind of find that hard to believe. Sure, I tend towards making the “good” choices, but… 10% seems an awfully low number for this sort of thing. Can it really be that low, Peter?

According to Molyneux, the tendency toward good is so strong that many gamers will choose it even at a hefty cost – though they don’t have to like it. In fact, a certain spoiler-y choice at the end of Fable II generated so much “hate mail from people” that Lionhead ended up giving an option to reverse the consequences of said choice in the game’s DLC.